Fill in your details below to receive newsletters with the latest centre news and updates:


Back To News & Events 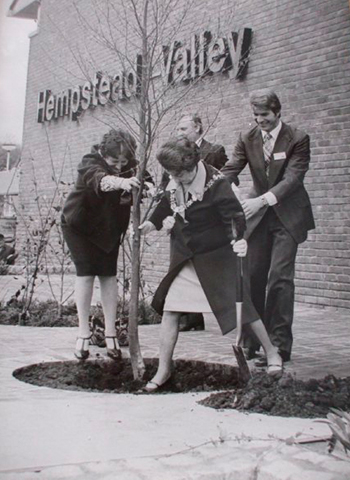 After many years of planning Hempstead Valley Shopping Centre opened on 17th October 1978. This month the shopping centre turns 40 and will be marking this milestone birthday by celebrating the past, present and future achievements of the centre.

When Hempstead Valley opened in October 1978, it was the first out of town shopping centre in the south east and was modelled on successful complexes in North America and Europe.  Hempstead Valley was home to SavaCentre, (a large hypermarket, now Sainsbury’s) and its innovative approach to retailing won it many commercial awards, including the 1980 European Award from the International Council for Shopping Centres. The award recognised “outstanding and creative shopping centre accomplishments”. This unique shopping experience, attracted huge numbers of customers not only from Medway and Kent, but further afield from London and the continent. Day trippers from France travelled on the Olau line for lunch and shopping at SavaCentre, combined with a tour to Canterbury.

The centre was built close to junction 4 of the M2 with easy access to the Medway towns, Sittingbourne and Maidstone. In 1979, Centre Director David Peek, said “We offer a new dimension in shopping with convenient free parking, reasonable prices, plenty of natural daylight and the novelty atmosphere of a market”. The late opening hours and the cut price petrol station and varied events staged supported their slogan “there is always something going on at Hempstead Valley”. Over 800 local people were employed, including mums who for the first time were able to return to work while fitting in with school hours.

Su Button Marketing Manager, manages the archives for the centre and has a gained a great insight into the history of Hempstead Valley. Su said “When I was younger I enjoyed having Mr Wimpy birthday parties in the Food Court. I fondly remember the water features and fish pond. Our loyal staff take great pride in their work and the centre has a strong, positive reputation.

Su added, it is known as Happy Valley to many, testament to the popularity of Hempstead Valley to the millions of customers that have visited during the past 40 years. We will be celebrating Hempstead Valley’s 40th birthday by looking at the past, present and future of the centre. There will be displays of vintage fashion, toys and memorabilia. From 15th until 22nd October Medway Council’s Archive Team will be displaying their archive photos alongside those from the centre. Our customers enjoy reminiscing about Hempstead Valley, particularly with regards to the fish pond! We then look at the present and future - local schoolchildren will be showcasing their ideas for the future of Hempstead Valley."

Come & meet Phil Gallagher the star of CBeebies' Mister Maker on Saturday 20th October from 10am until 11am.

And Phil Gallagher, television presenter of the hit arts and crafts show, wants you to show him your favourite books! To encourage this, the first 20 children to visit him on Saturday, October 20 will receive their very own Mister Maker book bag! Phil will be available at the KM Charity Team’s stand to meet fans, pose for photographs, and sign autographs from 10am for an hour.

From 12pm the centre is hosting retro gameshow fun and competitions from 12pm, in conjunction with kmfm.  The Mayor and Mayoress of Medway will be cutting a giant birthday cake at 2pm. Our chosen charity is One Great Day, with donations being equally divided between Great Ormond Street Hospital and Demelza Hospice Care for Children.

Many people still affectionately refer to Hempstead Valley as the SavaCentre, but the large hypermarket was re-branded to Sainsbury’s in 2004.  The centre has undergone a series of redevelopments including the M&S mall which was completed in 1992. More recently in 2015 The Venue development was built and is home to the restaurant quarter – Nando’s, Frankie & Benny’s, Bella Italia and Friendly Phil’s. Subway, Costa Coffee and Kent Reliance completes the line up at The Venue. A new TK Maxx and New Look opened in 2016 and JD Sports moved to new, larger purpose built unit last month.

In April 2018, planning permission was granted by Medway Council for 80,000 sqft extension, to include five large new units and decked car park.

Su added, “The Hempstead team is looking forward to celebrating the successes of Hempstead Valley over the past 40 years and to the future of this highly popular and thriving shopping centre!”

If you would like to share your memories or photos of Hempstead Valley, please email Su Button: marketing@hempsteadvalley.co.uk